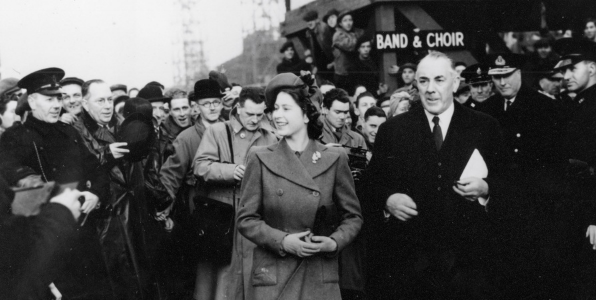 “As the daughter, wife and mother of naval officers, I recognise the unique demands our nation asks of you and I will always value my special link with HMS Queen Elizabeth, her ship’s company and their families.”

To mark the Queen’s Platinum Jubilee, a new exhibition celebrating Her Majesty’s loyal service to the Royal Navy, both official and personal, will open at the National Museum of the Royal Navy, Portsmouth Historic Dockyard on Saturday 9 April, the first anniversary of the death of HRH, The Duke of Edinburgh.

As the daughter and granddaughter of monarchs who served as young men in the Royal Navy, she was born into a family steeped in service with the Royal Navy.

She married Prince Philip, a serving naval officer and has spoken affectionately and publicly of her time spent as a naval wife in Malta during 1949-1951.

Two of her sons, the Prince of Wales and the Duke of York, became naval officers; her grandson the Duke of Cambridge was seconded into navy service and the Princess Royal holds the rank of honorary Admiral and has a long connection with the Women's Royal Naval Service (WRNS).

On display for the first time and recently donated to the museum by the HM The Queen is a naval uniform belonging to the Duke of Edinburgh alongside his Admiral’s cap.

It joins other uniforms worn by the Princess Royal and a flying suit of the Prince of Wales.

Photographs record the decades of service when, as a princess aged just 18, she launched her first naval ship, HMS Vanguard in 1944.

Since then, she has launched many others including HMS Dreadnought, the navy’s first nuclear powered submarine, on 21 October 1960.

The Queen is currently the Lady Sponsor of the frigate HMS Lancaster and the Royal Navy’s flagship, the aircraft carrier HMS Queen Elizabeth.

As sponsor she maintains a special interest to her assigned ships, a relationship which is highly valued by the crews.

The Queen also maintains close links with over 20 naval charities which support the health and welfare of sailors and their families.

The sheer scale and spectacle of international fleet reviews make them memorable, with seven during her reign including one to celebrate her Coronation in 1953 just off the coast of Portsmouth and most recently in 2005, to mark the bicentenary of the Battle of Trafalgar.

Newly-donated to the museum are 41 shell cases from the gun salute fired to commemorate the death of The Duke of Edinburgh in 2021.

The exhibition is open all year and entry is free with a valid ticket./p>

The Ultimate Explorer Ticket is the best value option for 12-month entry to all the attractions at Portsmouth Historic Dockyard including the Mary Rose, HMS Victory, HMS Warrior, HMS M33, the galleries and exhibitions of the National Museum of the Royal Navy, the Royal Navy Submarine Museum, Gosport, Explosion Museum of Naval Firepower, Gosport and Harbour Tours and starts from £39 per adult and £29 per child.

It is valid for multiple entries throughout the year, with family tickets available.