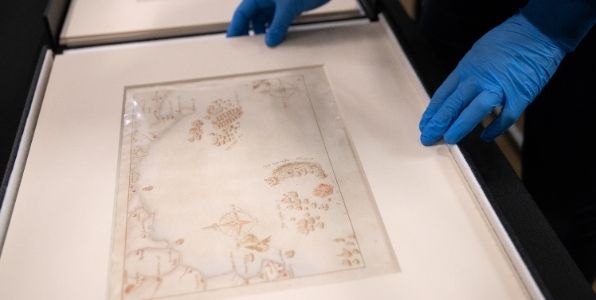 The National Museum of the Royal Navy is proud to announce that in just eight weeks the fundraising campaign to save the Armada Maps for the nation was successful and these incredibly rare maps will now remain in the UK. The maps, a complete set, are thought to be the earliest surviving representations of the naval battles and have not left the United Kingdom since they were first drawn in 1589. They were secured thanks to two essential grants from the National Heritage Memorial Fund and the Art Fund; and the generous support of the British public. Those of you who would still like to support the ongoing conservation of the Armada Maps can do so on the National Museum of the Royal Navy donation page.

Professor Dominic Tweddle, Director General of the National Museum of the Royal Navy commented: “Like many cultural and heritage institutions 2020 was an exceptionally tough year but we rallied and I am incredibly proud that we have made sure that the Armada Maps have been saved for generations to come. I would take this opportunity to place on record my gratitude to all those who answered our call to help. It was an amazing response from our funding partners and the public, who dug deep in extremely difficult times, to save these treasures.”

These ten ink and watercolour ‘Armada Maps’ present a defining moment in England’s national and naval history. They depict in real time a Navy defending England’s shores against invasion by the 16th century’s imperial super-power of Spain, with each map detailing the position in the Channel of individual ships in the English and Spanish fleets. The defeat of the Armada and the 16th century’s super-power was a turning point in forging England’s complex identity as it developed into the modern age.

The maps offer the opportunity to explore the role of the Navy throughout history as a protector of an Island Nation. Museums are uniquely placed to work with people and communities to provide space and opportunities to explore issues on a social and political level particularly now as the UK enters a new phase in our role on the global stage.

Culture Minister Caroline Dinenage said: "The Armada Maps, first drawn in 1589, are an important piece of British heritage serving to remind us of this pivotal naval battle. The export bar system exists so we can keep nationally important works in the country and I am delighted that, thanks to the tireless work of the National Museum of the Royal Navy, the Armada Maps will now go on display to educate and inspire future generations."

René Olivieri, Interim Chair of the National Heritage Memorial Fund, said: “We at the National Heritage Memorial Fund are delighted to support the acquisition of these rare and significant maps, which illustrate in incredible detail the defeat of the Spanish Armanda, a key moment in England’s history.  By safeguarding them from export, we can ensure that these maps remain in the UK as they have done since the 16th century. We’re proud that the Spanish Armada maps will join the wide range of iconic artefacts and places across the UK that the NHMF has played a vital role in saving for the nation."

Sarah Philp, Director of Programme and Policy for Art Fund stated: “Art Fund is so pleased to help save these irreplaceable maps for the nation, which not only evoke an iconic event in the history of England, but prompt reflection on the influence that history has on the present day. I know they will enthral visitors when they go on public display for the first time at the National Museum of the Royal Navy. As a charity, Art Fund relies on the generosity of its 159,000 members, and we are especially grateful to them for continuing to support the vital work of developing collections, during this very challenging time for museums.”

To ensure that the maps can be viewed and enjoyed by members of the public for a first time a new phase of fundraising has now started. The National Museum of the Royal Navy wishes to place the maps on display during 2021 and has longer term plans for them to tour the country when current COVID restrictions permit. Sponsors or partners wishing to support the campaign to support the display and tour are encouraged to contact fundraising@nmrn.org.uk

ABOUT THE NATIONAL MUSEUM OF THE ROYAL NAVY

The National Museum of the Royal Navy (NMRN), established in 2009, tells the story of the four fighting forces of the British Royal Navy, the Royal Marines, the Fleet Air Arm, the Submarine Service and the Surface Fleet.

Ours is the epic story of the Royal Navy, its impact on Britain and the world from its origins in 625 A.D. to the present day.

The NMRN is an MOD-funded national museum but in a normal year 80% of our revenue is derived from admissions and trading income. The Covid-enforced closures led to a loss of the greater part of that revenue and the requirement to furlough 90% of the museum’s staff for six months. The Museum closed on the 19 March 2020 and sites were only able to re-open on a phased basis between 14th August and 4th September, with the exception of HMS Caroline in Belfast which remains closed. Further closures were enforced by regional and national restrictions in November and December, before the national lockdown announced on 4th January. We now expect to close our sites until at least the end of March 2021 and have a significant proportion of staff on furlough.

ABOUT THE NATIONAL HERITAGE MEMORIAL FUND

The National Heritage Memorial Fund (NHMF) was set up in 1980 to save the most outstanding parts of our national heritage, in memory of those who have given their lives for the UK www.nhmf.org.uk @NationalHeritageMemorialFund
#NHMF40

ABOUT THE ART FUND

Art Fund is the national fundraising charity for art. It provides millions of pounds every year to help museums to acquire and share works of art across the UK, further the professional development of their curators, and inspire more people to visit and enjoy their public programmes. In response to Covid-19 Art Fund has made £2 million in adapted funding available to support museums through reopening and beyond, including Respond and Reimagine grants to help meet immediate need and reimagine future ways of working. Art Fund is independently funded, supported by the 159,000 members who buy the National Art Pass, who enjoy free entry to over 240 museums, galleries and historic places, 50% off major exhibitions, and receive Art Quarterly magazine. Art Fund also supports museums through its annual prize, Art Fund Museum of the Year. In a unique edition of the prize for 2020, Art Fund responded to the unprecedented challenges that all museums are facing by selecting five winners and increasing the prize money to £200,000. The winners are Aberdeen Art Gallery; Gairloch Museum; Science Museum; South London Gallery; and Towner Eastbourne.