Falklands 40: Why did the conflict happen? 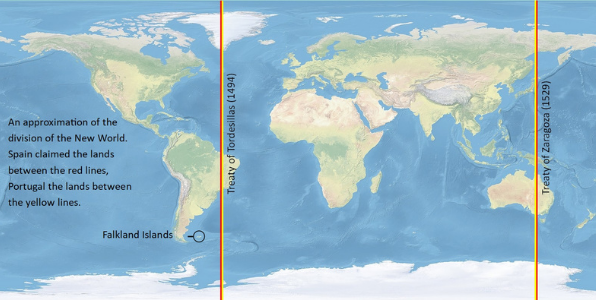 Why did the Falklands conflict happen?

Like all disputed territory in a post-colonial world, the roots to this question run deep.

With the discovery of the ‘New World’ in the late 1400s, ships began to pass and take note of a small group of islands in the South Pacific.

The combination of a Papal bull and treaties between Spain and Portugal soon divided the New World neatly between the two powers along two straight lines. Most of Latin America, and the Falklands with it, were in the Spanish section of the map.

Initial settlement, however, didn’t occur until the 1760s, when France and Britain - a year apart, and seemingly with no knowledge of what the other was doing - began settling on opposite islands.

When this was discovered, Spain was furious with both nations. France, as an ally of Spain, duly ceded their colony to the Spanish Empire, while the British were ejected by force.

After threats of war on both sides an agreement was reached; the British returned to the island and then withdrew a few years later when the situation had settled down at home. The Islands were then under Spanish control.

Things stood like this for 40 years, until repercussions born out of Napoleon’s invasion of Spain in 1808 became apparent on the far side of the world, and the Spanish left the Falkland Islands in 1811.

In 1816, newly independent, Argentina (then known as the United Provinces of the Rio de la Plata) claimed the Falklands as part of the post-colonial legacy from Spain.

After the 2nd World War

That was how the situation remained for a long time, with Britain adding South Georgia and the South Sandwich Islands to what they termed the ‘Falkland Islands Dependencies’. But, as Britain’s empire was being reduced in the years after the Second World War, defence spending and British presence in the South Atlantic reduced with it.

Argentina had never let the claim to the islands drop completely, and in 1964 reopened the issue with the United Nations Special Committee on Decolonisation.

In 1965, 17 years of diplomacy began between the UN, Britain and Argentina, with varying levels of progress.

Various tactics and solutions were suggested to address Argentina, the Islanders and Britain, but none provided a satisfactory resolution, and gradually tensions began to mount from this frustrating deadlock.

The situation was further complicated during the years of negotiation when a coup-d’état installed a military junta in Argentina, which led to Argentina adopting an increasingly hard-line approach over the Falklands.

A military junta is defined as a military or political group that rules a country after taking power by force.

The start of the Falklands conflict

In 1982, low popularity meant the military junta was in need of a boost, and focus again turned to the Falklands. Although they had been aiming for the invasion to take place towards the end of 1982, a series of events forced their hand to act earlier in the year.

On 19 March 1982, a group of scrap metal merchants with Argentine Marines among their number raised the Argentine flag over South Georgia.

The British sent HMS Endurance from Port Stanley in response, and the Argentine government expected Britain to send reinforcements, increasing the pressure on the military regime to launch the invasion before the opportunity passed.

When the decision to send a submarine force was made in Britain, it was leaked to the press, which announced to the world that reinforcements were on the way.

With the news that the window of opportunity was closing fast, and with civil unrest again erupting in Argentina, the military junta cast the die.