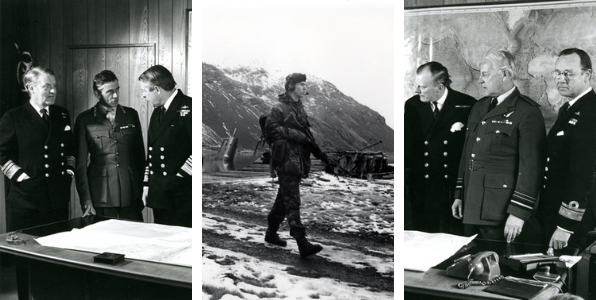 Friday 2 April 1982 marked the start of the Falklands and here we look at some of the key naval dates over the first month of the conflict. 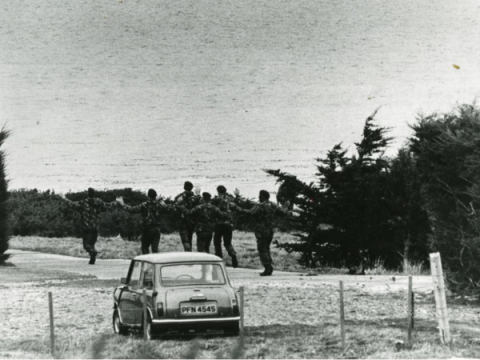 2 April 1982 - Government House Section of Royal Marines detachment were rounded up by Argentine forces as they occupied the Falkland Islands. 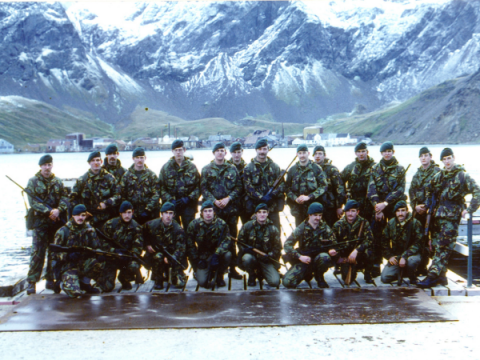 3 April 1982 – Argentine naval forces seized control of the east coast of South Georgia after overpowering the Royal Marines at Grytviken. The group of Marines consisted of the detachment from HMS Endurance, plus nine men from NP8901 (the detachment based on the Falkland Islands). This photograph was taken at Grytviken, 1 April 1982 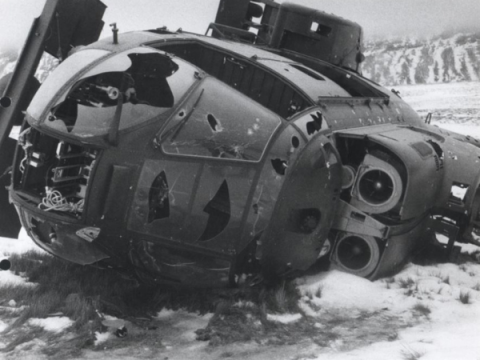 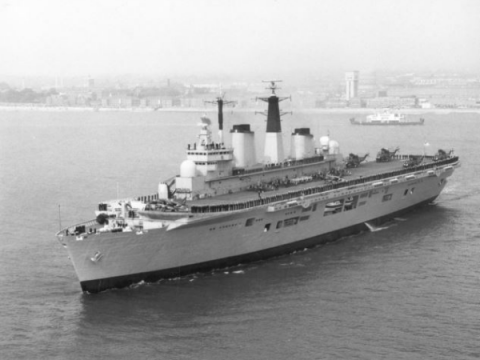 5 April 1982 - The Falklands task force sailed from the UK. The Submarine HMS Conqueror had already left from Faslane in Scotland. On the 5 April Ships of the Royal Navy including the aircraft carriers HMS Hermes and HMS Invincible, begin their journey to the South Atlantic.

6 April 1982 - HMS Fearless sails from Portsmouth bound for the Falkland Islands. The two amphibious assault vessels in the fleet, Fearless and Intrepid, had been highlighted for disposal in the 1981 Defence White Paper, but would prove to be crucial for landing troops on the Falkland Islands. 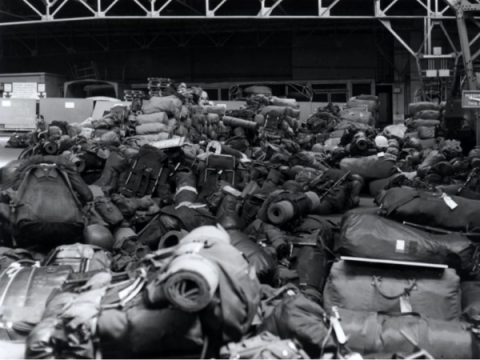 7 April 1982 - Baggage pictured at Southampton Docks prior to the embarkation of 40 Commando Royal Marines onto SS Canberra, bound for the Falkland Islands.

9 April 1982 - In 1942 the aircraft carrier HMS Hermes was sunk by around fifty Japanese dive-bombers off the coast of Sri Lanka. 307 of the crew died.

Forty years later, her namesake HMS Hermes was the flagship leading the Royal Navy Taskforce to the South Atlantic to liberate the Falkland Islands from Argentinian occupation. The Royal Navy lost many ships, but not HMS Hermes. 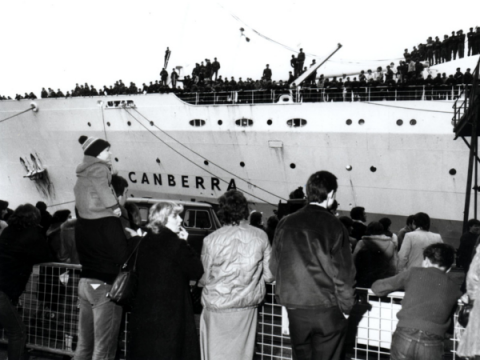 9 April 1982 – 3 Commando Brigade Royal Marines set sail from Southampton for the Falklands aboard SS Canberra, an ocean liner that had been requisitioned by the Ministry of Defence as a troopship. 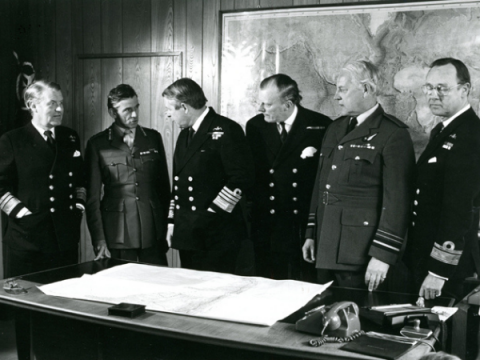 12 April 1982 – The commanders of the Task Force were at a conference at Fleet Headquarters, Northwood. The Service chiefs were looking at a map of the South American continent. 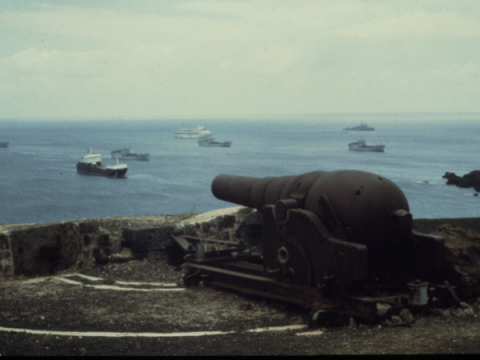 16 April 1982 – Ships of the Task Force left Ascension Island in the Atlantic, bound for the Falklands. 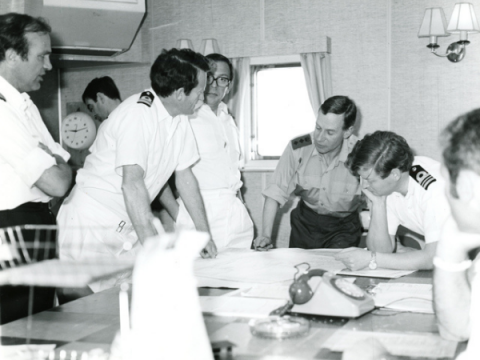 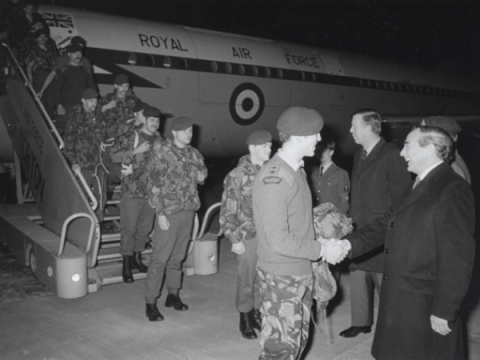 20 April 1982 - Lt Keith Mills, Commanding Officer of the 22 man detachment that surrendered to the Argentine forces after the Battle of Grytviken, 3/4 April 1982, was greeted by Rex Hunt, Governor of the Falkland Islands at RAF Brize Norton, Oxfordshire. 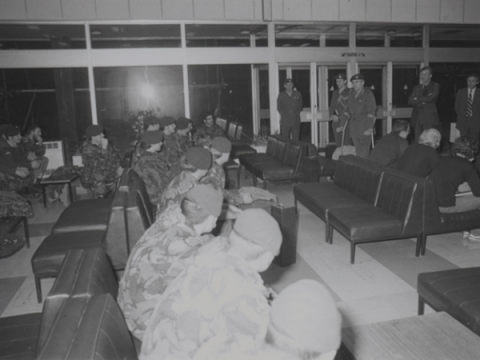 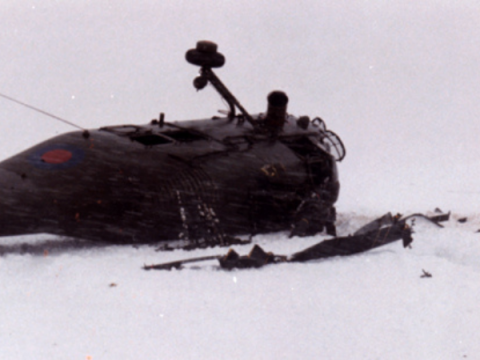 22 April 1982 - One of the two Westland Wessex HU. 5 from C Flight of 845 Naval Air Squadron lost whilst operating from RFA Tidespring, both crashed while taking off in a blizzard on Fortuna Glacier, South Georgia. A third 845 NAS Wessex from HMS Antrim rescued survivors. 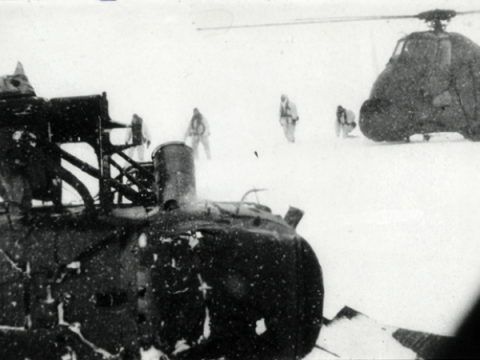 22 April 1982 - Westland Wessex HU.5 assault helicopter (XT464) from 845 Naval Air Squadron and operating from RFA Tidespring crashed while taking off in a blizzard on Fortuna Glacier, South Georgia after landing an SAS party on the glacier during the assault on the island on 22 April 1982. Another of 845 NAS's helicopters is in the background picking up the survivors. 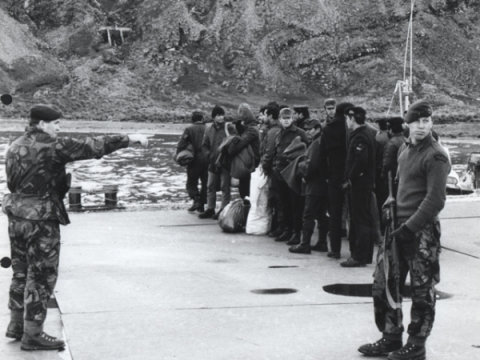 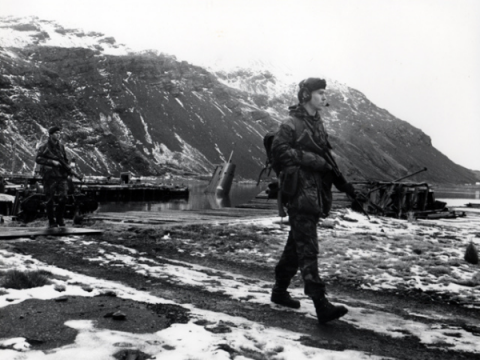 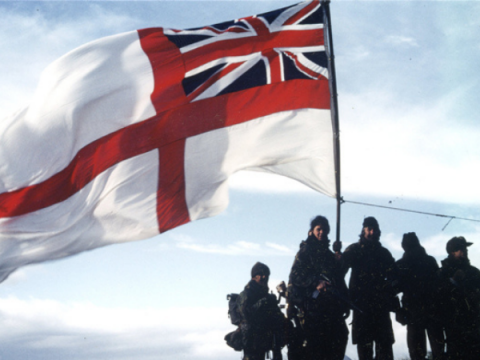