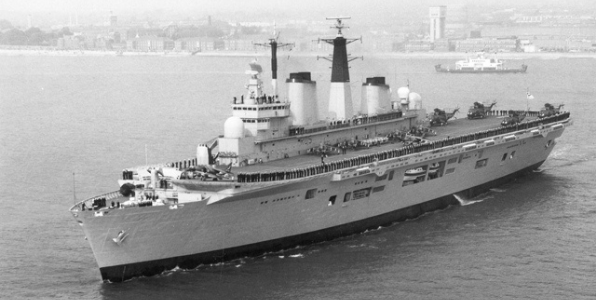 Thursday 14 June 2022 marks the 40th anniversary of the liberation of the Falkland Islands following the invasion by Argentina on 2 April 1982.

Over 250 British personnel lost their lives during the conflict and many others made great personal sacrifices. The Royal Navy played a crucial role in the war and this blog seeks to provide an overview of the conflict.

40 years ago, Argentina invaded a group of islands in the South Atlantic. To Britain the largest are the 'Falkland Islands' - 8000 miles away but have been a British territory since 1833. The conflict also included the Falkland territorial dependencies of South Georgia and the South Sandwich Islands.

The Falklands conflict was part of a much longer dispute between Argentina and Britain over the territories overarching authority.

The start of the conflict

On 2 April 1982, the day Argentina invaded the Falkland Islands, the Government acted quickly and ordered a Royal Navy task force to re-take the islands.

Many other British military personnel were involved too, officially the Falklands conflict was called ‘Operation 'Corporate'.

Who was in command?

For the British forces, Commander-in-Chief Fleet, Admiral Sir John Fieldhouse was in overall command. Rear Admiral ‘Sandy’ Woodward commanded the carrier task group while Commodore Mike Clapp was in charge of the amphibious ships. At the time Margaret Thatcher was the British Prime Minister.

The Argentinian Governor of the Falklands was Mario Menéndez. For the Argentinian forces, Juan Lombardo was Commander-in-Chief of the South Atlantic Theatre of Operations and is widely considered the instigator for the invasion. Leopoldo Galtieri was President at the time, he was an Argentine general and politician.

It’s important to note that there are internationally known rules of engagement around conflict. This determines how people can act and behave in different locations or circumstances. For example, even at sea, different bodies of water have different rules.

During the Falklands there was temporary 200 mile total exclusion zone set up to give boundaries to the conflict. Entry to this area means you would have been at risk of an attack.

This wasn’t declared initially but was defined on the 30 April by the British Government.

What happened and when?

The first task was to retake the island of South Georgia, a mission that included helicopters sinking the Argentine submarine Santa Fe.

On nearing the Falklands, Woodward’s concerns over attack led to his being granted approval by the Government to fire on the Argentinian cruiser, General Belgrano. This is and remains a highly controversial decision due to the ship’s location outside the total exclusion zone.

Throughout May, Argentina responded with significant air attacks and the Royal Navy experienced a series of setbacks including the sinking of HMS Sheffield, Ardent, Antelope and Coventry.

Another major setback of the British campaign was the destruction of vital helicopters and other supplies being transported on the Atlantic Conveyor, a container ship that had been repurposed for the conflict. The ship was badly damaged in an Argentinian attack.

The loss of the helicopters created major transport difficulties for British operations leaving them reliant on the navy to transport troops which made them vulnerable to further attack and sinkings.

It also meant the Royal Marines had to yomp (march) 56 miles in three days across the Falklands before engaging the Argentinians.

There were fierce battles and the Argentinians responded to the move on Port Stanley by targeting and damaging HMS Glamorgan.

After hand-to-hand combat with Argentinian troops, the British eventually took the higher ground which ultimately gave them the strategic advantage.

The Argentinians surrendered on 14 June.

The Falkland Islands remains a dependent territory of Britain.

Header image: HMS Invincible leaving for the Falklands in 1982