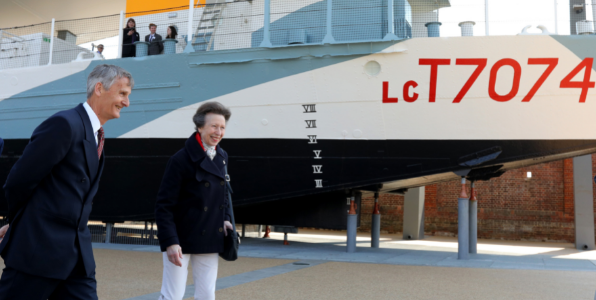 The National Museum of the Royal Navy is delighted to announce that Her Royal Highness The Princess Royal visited unique D-Day survivor LCT 7074 at the D-Day Story, Southsea on Thursday 21 April 2022.

As the patron of the National Museum of the Royal Navy, Her Royal Highness The Princess Royal inaugurated LCT 7074 and thanked the organisations and individuals who have worked together on this prestigious award-winning heritage project. 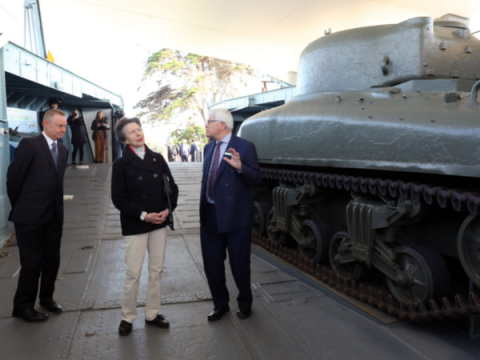 LCT 7074 is the only surviving Landing Craft (Tank) that participated in Operation Neptune, the naval dimension of Operation Overlord, the allied invasion of German-occupied Western Europe in 1944 known as D-Day.

A six-year long project to raise, conserve and interpret the 200-foot-long vessel concluded with opening of the ship to the public at the D-Day Story, Southsea.

Her move, from Portsmouth Naval Base to Southsea seafront, in an echo of D-Day itself, was dogged by complexity, delay, working against shifting tides, high winds, and a race against time and road closures, all during COVID restrictions.

“The sheer scale of LCT 7074 is breath-taking and we were honoured to bring her back to life. We’re delighted to welcome our patron, The Princess Royal, today, and for her to give personal thanks to the skill and dogged determination of the project team to save LCT and the story of D-Day for future generations.” 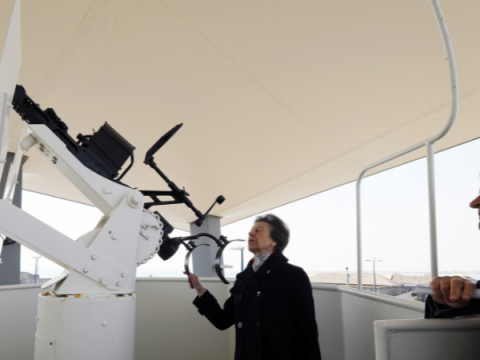 Restored, conserved and ready for visitors

The vessel first opened to visitors in late 2020 and despite the impact of Covid, nearly 40,000 visitors have since gone aboard.

LCT 7074 can be visited as part of the D-Day Story museum, on Southsea seafront, run by Portsmouth City Council. See theddaystory.com for admission details.