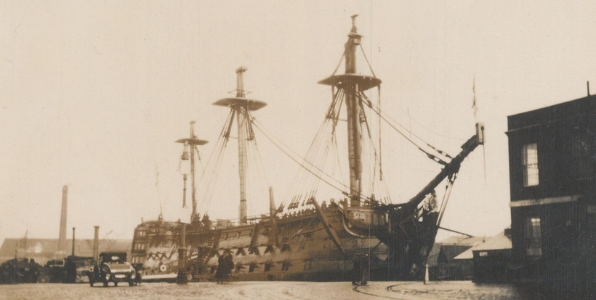 An introduction to this important anniversary

HMS Victory was moved into her final resting place a century ago at Portsmouth Historic Dockyard, dry dock no. 2.

The ship’s custodian, the National Museum of the Royal Navy, has ambitious plans for the next step of the iconic national treasure’s conservation.

As well as this, a raft of new visitor experiences are coming across the wider museum group in Hartlepool and Somerset in 2022.

The history of HMS Victory

One hundred years ago today, on January 12 1922, the world was watching Vice-Admiral Lord Nelson’s celebrated survivor from the Battle of Trafalgar.

HMS Victory was towed from her berth in Portsmouth Harbour and secured into the dry dock.

Dry dock 2 is a scheduled ancient monument and is itself 220 years old.

First floated out at Chatham in 1765, Victory enjoyed a varied career.

Unfortunately, by the 1920s she was in poor condition and at risk of sinking at her mooring without considerable intervention.

Later in 1922, on October 21st, Trafalgar Day, the “Save the Victory” campaign by the Society of Nautical Research was publicly launched.

This society continues to play a hugely significant role in securing the world-famous flagship for posterity.

Victory had been a popular tourist attraction when berthed in the harbour throughout the 19th century.

She was finally officially opened as a museum ship to the public by King George V on 17 July 1928.

Victory has since welcomed more than 30 million visitors.

As well as this she has welcomed a host of famous visitors including Royalty at dinners and balls.

She even survived a 500lb bomb dropped by the German Luftwaffe during the Second World War.

HMS Victory remains the flagship of the First Sea Lord & Chief of Naval Staff, and is the oldest commissioned warship in the world.

The dry dock itself is now part of a greatly enhanced visitor offer for Victory.

In addition to a self-guided tour of the ship, visitors now have the chance to descend into the dry dock under the enormous hull on a dedicated walkway.

Visitors can weave through the recently completed and new state of the art support system.

You can read more about the history of HMS Victory in another series of blog posts on our website.

The next stage of HMS Victory's conservation

This year the National Museum will begin the next phase of major conservation works to Victory, intended to ensure the ship is protected for the next half century.

Rotting planking will be removed from the hull and replaced with new oak, repairs made to the ship’s structural framework, and she will be fully re-rigged.

This process will last ten to fifteen years and cost £35million.

The project will provide visitors with a once-in-a-generation opportunity to see beneath Victory’s skin and experience a First Rate Line-of-Battle ship being taken through a Great Repair.

You can find out about one of the first steps of conservation, the removal of the lower mast, in another blog post.

HMS Victory now counts the aircraft carrier HMS Queen Elizabeth and HMS Prince of Wales as neighbours when they are berthed in their home port of Portsmouth.

An upgraded Aircraft Carrier Experience at the National Museum’s Fleet Air Arm Museum Yeovilton will be relaunched in summer 2022.

It will connect the heyday of jet aviation to the operations and deployment of the Queen Elizabeth Class carriers and F35 aircraft at the heart of the Royal Navy.

The £1 million upgrade will create a new immersive experience which blends the best of digital technology with the scale of a carrier flight deck.

This upgrade will also include incredible aircraft from the museum’s collection, showcasing the Fleet Air Arm's air power from the sea' in the past, present and future.

Get ready for swashes to be buckled and timbers shivered as the National Museum of the Royal Navy prepares for a pirate takeover.

The transfer of the hugely popular blockbuster family exhibition to Hartlepool has been completed just in time for the Easter holidays.

‘Horrible Histories® Pirates’ is based on the best-selling series by Terry Deary and illustrator Martin Brown.

This internationally-acclaimed exhibition will open in Hartlepool this Easter and is set to give youngsters an action-packed insight into the mysterious and murky world of pirates across the ages.

As fans of the books and TV series will expect, ‘Horrible Histories® Pirates’ takes a funny and foul look into pirate history.

A history complete with parrots, cutlasses and all the gore and more.

Throughout the hands-on exhibition there will be opportunities to design pirate flags and visit a raucous pirates’ tavern.

There will even be a chance to take out enemies with cannon fire and command a pirate ship on the high seas.

Young scallywags can also learn the rules of the ‘pirates’ code’ and delve into the often-gruesome history of pirate ships and their infamous commanders (both male and female).

Our visitors will have to practise talking like a pirate too, or risk a trip to Davey Jones' Locker.

The exhibition has been developed in association with Scholastic UK and is being transferred to Hartlepool from Portsmouth Historic Dockyard.

The unique work of Terry and Martin comes alive in this fun-packed exhibition which has already proved to be a hit with Portsmouth audiences and is expected to delight visitors to Hartlepool this year.